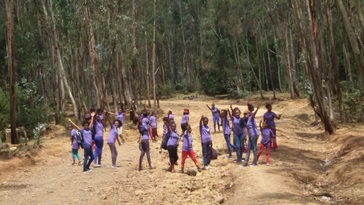 International Day of the Girl launched on October 11, 2012 and what better timing for us, as we were preparing our soft-launch for April that year. I use the term ‘we’ loosely,

considering our test group consisted of three girls and the board was, well, me.

Everything IDG stood for was the foundation of Studio Samuel. I enrolled our event with an IDG affiliate who in turn granted us an official IDG virtual flag, waving proudly for us in this first-ever global event recognizing the need for girls’ rights.

Studio Samuel was on the map! We were one of only three events in

Ethiopia that year. It didn’t matter how small our event would be. What mattered is that we were involved and remained involved with this powerful platform.

Fast-forward to October 1
1, 2015. Your newsfeed was likely pumping out the moving, ubiquitous quote, “Empower a girl and you empower the community.” Spot on, but dig deeper. Remember, this is a recognized day by the UN with a long-term, outlined plan in place (as part of the Millennium Development Goals), specifically for 203 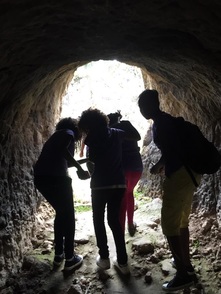 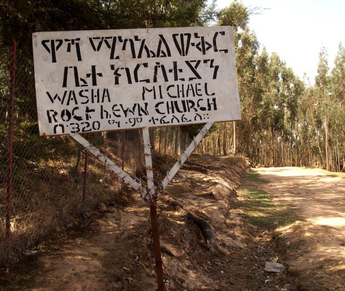 ‘Community’ is not necessarily the present day community this girl lives among. We’re all aware of the near impossibilities of changing the mindset of a generation. It’s moving beyond this and targeting thisgirl’s generation and the next, where she will be making the

rules. This is what it means to break the poverty cycle.
Reach the girl now. Reach her next generation tomorrow.

many places around the globe. 2030 begins the decade for children born to girls in Studio Samuel’s program, Training for Tomorrow. A TFT graduate will not arrange a marriage for her daughter or keep her at home to work instead of enroll her in school. She will support herself and never face the dilemma of sending her daughter abroad to work on behalf of the family. She’ll understand the need for proper healthcare and ensure all family members receive it. She will do these things, and more, because she had the opportunity and was exposed to a global movement addressing her barriers. It will start in her home.

It’s this global movement that has also moved us forward. By collaborating with select organizations of similar purpose, we’ve been able to bring the most optimal curriculum and experiences to Training for Tomorrow students. Through the support of The White Feather Foundationand Ethiopia Healthcare Network, girls in our inaugural TFT Class of 2018 will be armed with the Ten Core Life Skills, as established by the World Health Organization, UNICEF and more. Again, all relevant to IDG’s messaging

So, our virtual IDG flag this year represented more than three girls – (to date, we’ve
reached 200+ and counting) and we’re more than a board of one (five Board of Directors and five Advisory members). Our IDG event was a collaborative effort with the girls choosing to climb a mountain. It would acknowledge what IDG means to them and its role in their lives. First, they couldn’t believe there WAS such a movement. As it began to sink in over the past few months, they started realizing there was a pattern here. Their TFT curriculum made more sense. From the minutia of it to the big picture of what life will be like for their children. They understand that breaking their poverty cycle is not unattainable, which is the first step for all of us.

From the UN…This year, as the international community assesses progress under the Millennium Development Goals (MDGs) since their implementation in 2000 and sets goals to be achieved by 2030, girls born at the turn of the millennium have reached adolescence, and the generation of girls born this year will be adolescents in 2030. As we reflect on the achievements of the past 15 years and plan sustainable development goals for the next 15, it is an opportune time to consider the importance of social, economic, and political investment in the power of adolescent girls as fundamental to breaking the intergenerational transmission of poverty, violence, exclusion and discrimination and to achieving equitable and sustainable development outcomes.